A food crisis is a situation that is characterized by a sharp rise in the rates of malnutrition and hunger, both on the local and global level. The crisis revolves around the demand and supply rules as far as food commodities are concerned. Interestingly, food crisis can take very diverse faces and so can the Food Shortage Survival tactics. For example, while shoppers in the US are astonished at the skyrocketing food prices, countries such as Somalia don’t have enough food in the stores. As highlighted here, food crisis survival calls for some sort of preparation. 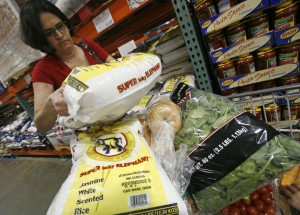 The mention of a looming food crisis is enough to scare a lot of people. The good news is that there are a number of ways of fixing this problem, including getting food aid. Actually, food aid programs have been existent for decades and have been very helpful to countries in dire need for food. However, there have been growing concerns about the inefficiencies of food aid distribution, and the likely effects of the food on the destined economies. Due to these challenges, some international organizations, for example Care, have thought of giving the affected people money to buy food instead of relying on shipments. This is because sometimes the food aid may interfere with the food markets of the destined nations.

Research shows that on average, farmers in Africa use ten times less fertilizer than their counterparts in the Western economies. Since some food crises are caused by poor farming methods, improving farm yields could be a perfect food crisis survival measure. Some efforts towards improving food production in poor economies are evident, especially those led by the Bill Gates Foundation.

Many a times, politics of the land may cause a severe crisis, even food shortage. However, by just removing tariffs and taxes, a lot of hunger can be alleviated. Considering the strides that Egypt, India, and other countries made when they dropped barriers against trading on certain foodstuffs, it is clear that most of the current food shortage could be self-inflicted. The main problem is that the wealthy countries of Europe and America are yet to open up trade, and have adopted abnormally high subsidies for their local agriculture production. This makes trade from across the borders impossible.

Preserve Food for Later Use

On a more individual level, it is important to ready yourself for food shortage by putting some foodstuff aside in times of plenty. Even if you don’t get a surplus from your small garden, visit the local market and get some vegetables and fruits for those low prices. You might also be prompted to acquire freezing and canning equipment for storage.

Anyone, no matter how awful the soil is, can grow something in their space. During the fall of winter, homeowners can plant some vegetable and fruit varieties to supplement their food in time of crisis. Even if they are clueless on how and what to plant, there is always an extension officer who can give some valuable advice.

Governments can enhance food shortage survival by enhancing food distribution, while planting some food at home can save a lot on the budget.